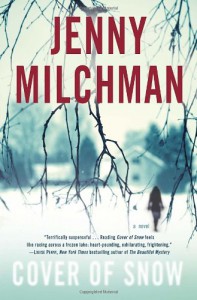 Nora Hamilton wakes up one morning and finds her husband dead from an apparent suicide. He was a police officer in the small town they live in and Nora can't help but ask the question of why her husband would take his own life when he had appeared to be happy.

I found Cover of Snow compelling even though there were some issues with it. The writing took getting used to at first. In the beginning, I didn't care for the way the characters broke off their sentences while talking to each other. This primarily happened between Nora and her family and I think it was supposed to illustrate the state of Nora's mind after losing her husband. She was having a hard time putting sentences together, but it was annoying to read. This stopped later on and I enjoyed the writing a lot more.

The problems I had with the overall story were plot threads that were never tied up, and things that didn't really make a whole lot of sense. Also conclusions were jumped to a couple of times that were far-fetched or too easily reached, and the fact that Dugger, the autistic man had everything so conveniently on film or recorded was too much of a coincidence to be believable. How was he there for all of that and no one noticed? The only conclusion I came to was maybe he was there because the police used him as their tracker. It was mentioned several times in the book that he was a good tracker, but never explained. Did they mean he was helping the police track suspects? I also couldn't figure out why the recording of the childbirth was included in the book. As far as I could tell it served no purpose.

I enjoyed this mostly despite the problems I had with it and I found it hard to put down. What I did like about the book was the relationship between Nora and her sister and the way the author described the surroundings and made you feel like you were there in the cold, winter weather right along with Nora.

There is one thing that I was hoping for that didn't happen. That her husband hadn't actually killed himself. Going into the book, I was sure he had been murdered.
Tweet